THINGS TO KNOW ABOUT AGADIR

AdminLeave a Comment on THINGS TO KNOW ABOUT AGADIR
AGADIR which means “walled fortress town” in Berber, is the capital of Morocco’s Souss-Massa Draa region,It is best known as a vacation hot spot where sprawling hotels, chic restaurants, and a suntan-guaranteeing climate ensure it is always bustling with visitors. But the city is also an important fishing port, which employs many of the local people and provides the country with much of its supply of sardines, one of the staple foods..

Agadir, the Drâa Valley, and the South

Located in a huge, horseshoe-shaped bay of golden sands that stretch for alongside the crystal blue waters of the Atlantic Ocean, and boasting a temperate climate with warm sunshine almost every day of the year, the modern city of Agadir is Morocco’s foremost seaside resort. Here you can enjoy everything from jet skiing and sailing to a round of golf or horse riding on the beach.

Agadir has a fresh, dynamic feel unlike any other Moroccan city. There are no imposing red pisé ramparts, huge fortresses, or chaotic medinas here, and no ancient kasbahs or souks to explore. Instead, its wide boulevards are lined with contemporary buildings, neatly sculpted parklands, and European-style side- walk cafés where you can sit with a coffee watching the world go by. Seeing its shiny new buildings and smartly laid-out streets, you could be forgiven for thinking Agadir is a new town, but it has a long, if now largely invisible, history, It was one of the wealthiest strongholds in the country, with a bustling kasbah and several palatial buildings, when a devastating earthquake struck on February 29, 1960, burying most of the city beneath a pile of rubble. The disaster prompted Morocco’s then ruler, King Mohamed V, to declare that a new Agadir would be erected near the site of the old deliberately designed in imitation of-and in answer to-European-style resorts, the new Agadir has grown to become the country’s main package holiday destination, attracting hordes of visitors throughout the year, mainly from Morocco and Europe. True, it has a slightly more international, slightly less Moroccan feel to it than many of the country’s other holiday hot spots-much of its architecture conforms to the standard Mediterranean resort template-but it does what it does well, with a good collection of hotels and restaurants, a some of Morocco’s finest beaches.

Sun, sand and sea are by no means Agadir’s only charms, however. It is also the cultural and economic hub of the region, and the country’s largest fishing port, which adds a bit of real-life grit to all that holiday sheen. Just a few kilometres south of the city, at the foot of the Anti Atlas Mountains where the Oued Souss flows into the ocean, lies the start of the Souss-Massa National Park, a huge protected environment of reed beds and sandbars. This magnificent landscape attracts birds and wildlife in even greater numbers than the city does vacationers, Apart from boasting the world’s largest colony of critically rare Northem bald ibises, the park also has flamingos, spoonbills, rare marbled ducks, and thick-billed larks Farther inland are mountains, river valleys, huge plains, and, to the south, great sweeps of pre-Saharan desert, where an equally diverse range of flora and fauna exists. Agadir has often been described as the gateway to the Draa Valley and the south, and it is ideally located for excursions to places such as the ancient cities of Tafraout and Tiznit, set in breathtaking scenery near the Kerdous Pass, or Taroudant, known as the “Little Marrakech” because of its mighty red pisé fortifications. You can also head farther inland to the centuries- old city of Ouarzazate, which comprises a series of kasbahs dotted over the desert plateau landscape and is today a major center of film- making, or to the astonishing brilliant red town of Zagora in the very heart of the Draa Valley. Agadir also makes a good base for exploring the Tifrit Valley, widely considered one of the most beautiful in Morocco, or heading farther south to the epic scenery of the Sahara, passing through several fascinating towns and cities on the way. These include Goulimine, which is famous for its camel souk; the thriving fishing ports of Tan-Tan and Tarfaya, busy Laiyoune, which enjoys a beautiful desert setting and Dakhla, which nestles in a pretty bay less than (320 km) from the northern border of Mauritania From the modernity of Agadir and the rich greenery of the Draa Valley to the sand dunes and rock terrain of the Sahara, this is one of the most awe inspiring and diverse regions of Morocco. 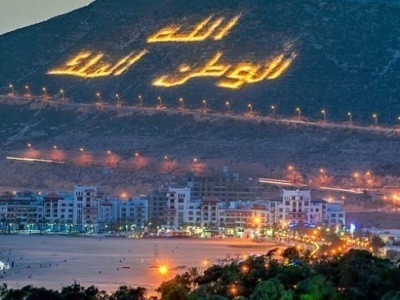 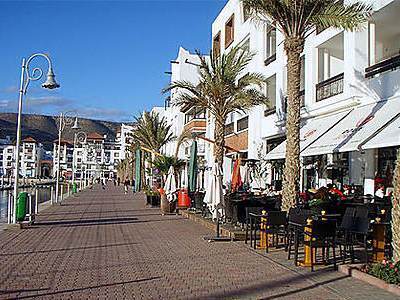 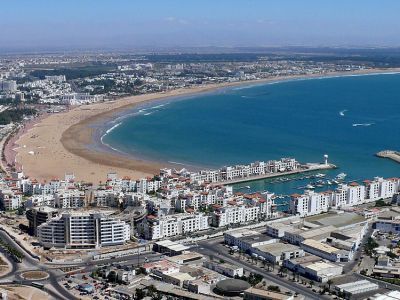 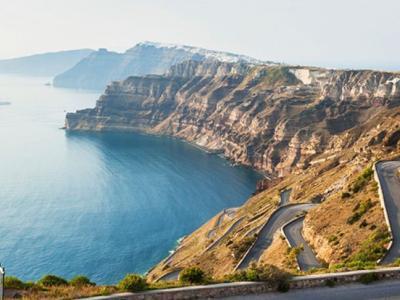 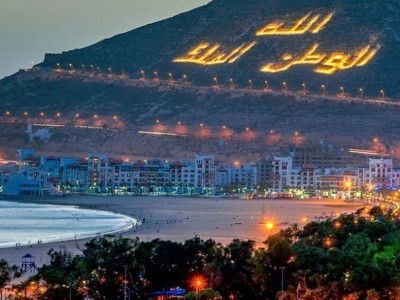 On February 29, 1960, Agadir suffered the most devastating earthquake in its history. Measuring 5.7 on the Richter scale, the earthquake’s epicenter was very close to the city center and also very shallow, so the intensity of the shaking unleashed unprecedented destruction. The quake started at 11:40 p.m., when most of the city’s 45,000 inhabitants were in their homes and tourists were in their hotels. It killed at least 12,000 people, injured many more, and left thousands homeless. Even the ancient kasbah, which had survived the great quake of 1731 virtually unscathed, was flattened. Rescue teams were drafted in from around the world as attempts were made to recover those trapped beneath the debris. Thankfully the city’s airport, located away from the center, was undamaged, allowing rescue teams and emergency supplies to be flown in. The airport was also used as a temporary hospital in the weeks following the quake. Two days after the earthquake, the Moroccan authorities ordered an evacuation of the city amid fears that diseases might begin to spread. The late King Mohamed V visited Agadir a week after the quake and, though understandably shocked and horrified by the destruction, made the bold declaration: “If Agadir is doomed to be destroyed, then its rebuilding depends on our will.” He also vowed that the city would be rebuilt within a year. The new city was constructed (1.6 km) from the quake’s epicenter.