Things to know about Essaouira

AdminLeave a Comment on Things to know about Essaouira
ESSAOUIRA is a charming colorful fishing town about three hours travels West of Marrakech.During the first Century A.D , ships came from across the Roman world to trade gold and other valuables for the most prestigious commodity in the Roman world at the -imperial purple dye . This dye was made from a type of sea snail, which lived around the rocks of Essaouira’s lle de Mogador .the town continual as a quiet fishing and trading port until it caught the attention of the Portuguese, who captured the port in the 16th century. Over the next hundred years, the town was fiercely contested between Morocco and the seafaring nations of Europe. After a number of close calls, the Alaouite sultan Mohamed III decided to take action. He saw Essaouira as a key part of his empire’s valuable trade with Europe, and thought it would make suitable base for Morocco’s navy. As such, it needed protection. The man who was commissioned to realize the sultan’s vision was the French engineer Theodore Cornut, captured by the Moroccans from a French ship. Cornut’s design included more than just enclosing the city with walls. He also drove a number of wide, straight boulevards through the center of medina. His designs from the core of the Essaouira we see today. A well- ordered place laid out around its port, with a more open and less cluttered atmosphere than neighboring Marrakech. Now the attractive seaside town of Essaouira is much loved Holiday spot for ordinary Moroccans, a quiet friendly town that nonetheless boats a vibrant cultural life and excellent souks. Essaouira’s impressive fortified medina is a fascinating place to explore, and the area’s stunning beaches are popular with windsurfers and kite surfers from around the world. 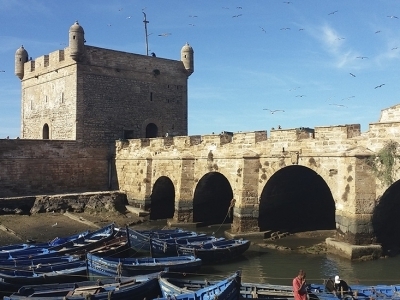 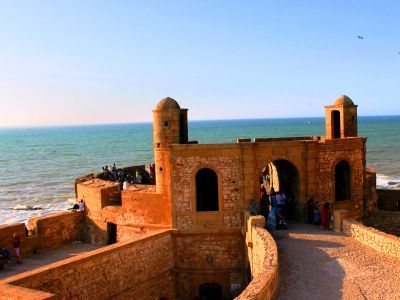 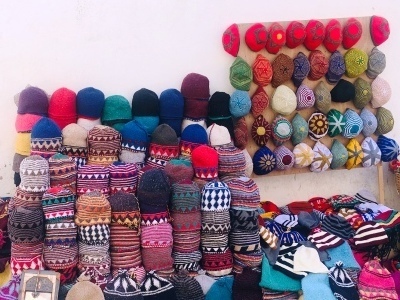 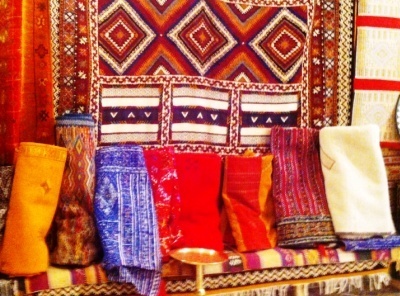 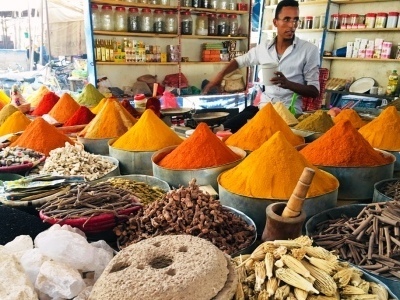 The compact seaside town of Essaouira, with its relaxed atmosphere and cool sea breeze, seems world away from the dust and crowds of Marrakech. Despite its diminutive size, however, the town has much to offer, including stunning beaches, a beautifully preserved medina, and impressive 18th century ramparts and fortifications.

The Tyrian purple dye, which is made from sea snails, was first harvested in Tire (giving the dye its name) in southern Lebanon during the time of the Phoenicians (1500-300 B.c.).  It reached its height of use during the glory years of the Roman empire, when it was used to color the clothes of emperors and wealthy aristocrats.  Essaouira became a second source of the dye when these small sea snails were also found living on the rocks around the lle de Mogador.  The dye was produced by grinding up the snail shells, a time – consuming process that required many shells to produce even a small amount of dye, hence its high price.

Essaouira is blessed with some of the fin est beaches in Morocco, but strong winds off the Atlantic Ocean can make sunbathing a tad uncomfortable.  Conditions for windsurfing, however, are ideal.  The main windsurfing areas are the bay at Essaouira itself and Sidi Kaouki to the south, which are suitable for all levels and abilities, with generally favorable winds from the northwest – although periodic strong gusts can make conditions more difficult.  Cap Sim, also to the south, offers similar conditions, but with a prevailing southerly wind and occasionally powerful sea swells.  The conditions at Moulay Bouzerktoun beach are more challenging and suitable only for intermediate and advanced windsurfers, as wind speeds can reach 40-48 km per hour. Several companies offer surfing packages and equipment rental for experienced surfers and tuition for beginners, as well as changing and shower facilities.  Good choices include Ocean Vagabond (boulevard Mohamed V, Essaouira, tel 0524/78 39 34, www.oceanvagabond.com) and Essaouira Kitesurf (tel 0672/06 37 25, www.essaouirakitesurf.com), but the most popular is Explora (  2 place Chrib Atay, Rue Laalouj, Essaouira, tel 0611/47 51 88, www.exploramorocco.com), which is run by a group of friendly and knowledgeable locals who have been surfing in Essaouira for decades.  Some places offer kite surfing and water surfing courses, too.  It’s worth making sure that your travel insurance covers water sports before you surf.

A Walk in Essaouira & Around

With a fascinating medina full of narrow , winding streets, some first-rate architecture, and along stretches of sweeping sand fronting the Atlantic, Essaouira offers a microcosm  of Morocco’s charms.

Essaouira’s bay is dotted with little islands poking their heads out of the water. The ile de Mogador, which gave Essaouira its former name, provides shelter to the city’s busy harbor from the strong winds coming off the Atlantic Ocean. It was this shelter that probably led to the early colonization of the area.